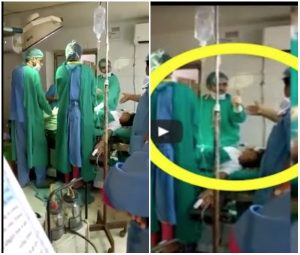 Two doctors in India arguing while standing over a pregnant patient during an operation were temporarily released from their duties after a video of their quarrel surfaced on the internet.

Incident happened at the Umaid hospital in north Rajasthan, footage of the incident has been widely circulated, causing outrage.

A senior hospital official told the BBC that the woman and her baby are fine.

The source of the leaked video is unclear, but the official confirmed that it came from within the hospital. Dr Ranjana Desai, the superintendent of Umaid Hospital in Jodhpur, told BBC:

“By the time I saw the video and conducted an internal inquiry, the media had already reported that this baby had died,”
A baby did die, but not the one the media reported. A few feet away, on another operating table within the same room, a different woman gave birth to a stillborn baby. These two incidents are not linked.”

In the video, which has been shared widely across media and online, the two doctors can be heard slinging insults at each other in Hindi before arguing over whether the patient had eaten before surgery.

She said that the two doctors were not formally suspended, but had been released from their duties at the hospital while they proceed with an internal inquiry.

Additionally, the hospital is in the process of collecting statements from staff to find out who shot the video and how it came to be leaked.

The Rajasthan High Court has ordered the hospital to submit a report, while they proceed with a separate state level investigation into the incident.