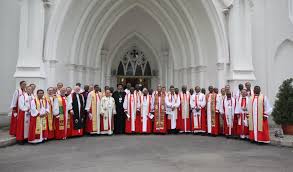 The Church of Nigeria Anglican Communion, has sympathised with the Government and people of Benue Sate over the recent devastating flooding in the state.

The primate of the Church, Most Rev. Nicholas Okoh said this in his opening address at the just concluded 12th General Synod of the Church of Nigeria Anglican Communion in Port Harcourt, Rivers State. Primate Okoh who said that Benue State is very important of the nation, especially for food production, pleaded for support to victims in the incident.

“We plead for support for the victims from the Federal and State Governments in view of this incident, we call on different state governments to be more stringent with municipal control to stop people from building on water channels.

Okoh said that, to avoid future occurrence of such an incident, government at all levels must come up with strict measures of controlling indiscriminate throwing and dumping refuse into drainages, adding that those caught doing so must be punished.

“If such occurrences must be kept under check, the government at all levels must come up with measures of controlling indiscriminate throwing and dumping of refuse, such that culprits will be dealt with”

“This was the system before and should be reinstated now to enable adults gain literacy, especially in reading and writing.
“This will help improve the general behavioural pattern in the country,” the primate said: