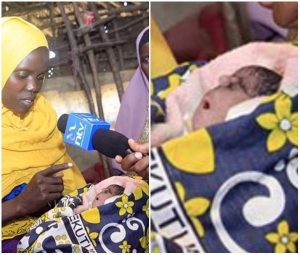 A baby girl who was born with facial deformities in Kenya has died of starvation after her mother refused to breastfeed her.

The baby was born on Sunday, August 27 and did not have eyes. Her nose was on the upper side of her face.

According to the family, the mother, Ms Mariam Mwakombo 22, refused to breastfeed the newborn because she was afraid.

The innocent baby cried for hours after birth due to hunger and later died at night. 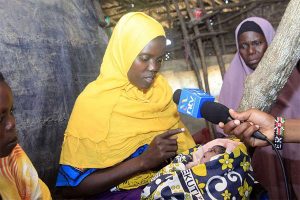 A baby girl who was born with facial deformities in Kenya has died of starvation after her mother refused to breastfeed her.
Mariam and her daughter

“She frightened me. I have never seen such a human being.
Ms Mwakombo’s husband, Hassan Kitoto, said he too could not comprehend why God gave him such a child.

“I am equally scared. I have never seen such a human being. Whatever the elders will decide let it be,” he said.

Ms Mwakombo had only attended two antenatal care clinics at a public hospital in Kilifi before giving birth prematurely to the baby at home.

The villagers and family members wanted to throw the baby in a dungeon to let the ‘gods’ take care of the child. But after she died they buried her outside her parents’ home to ward off bad omen associated with such a child.

Mwakombo and her family buried the infant after watching her starve to death without seeking medical attention because of the ongoing medical strike in the country. The baby’s mother, Mwakombo said:

“Hospitals are very far and I couldn’t afford the clinic at private hospitals. I used traditional methods.
“My water broke while I was doing my chores and she just came out. She’s seven months old. I never felt any pains during her birth. But on looking at her we realised she did not have eyes. I was dumb founded.
“The best we can do is throw her in a dungeon in a forest. I did not name her. I could not breastfeed her lest the omen falls on me”.
Some doctors suspect the child was born with a condition known as anophthalmia. It is a condition in which one or both eyes do not form during pregnancy.