BBNaija Housemate, Cee-c To Go For Counselling After Media Tour

Cee-C, who emerged the 1st runner-up of the third season of the Big Brother Naija show, says she would be going for counselling after her media tour.

The former housemate revealed this during a question and answer session with her fans on the payporte official Instagram page.

When she was asked if she would be going for counselling, she said: “sure ma’am, it’s been arranged after the media tour.”

She was also asked what she’s currently doing to make herself better. “Listen more, be more open to making friends, control my emotions,” she said. 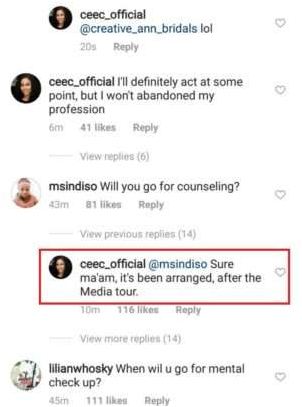