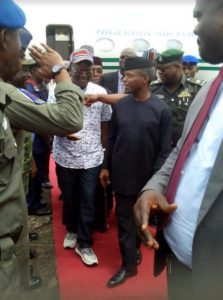 Vice President, Yemi Osinbajo on Wednesday visited Benue over the flood that ravaged some parts of the state.

At the monarch’s palace, the VP said he was honoured to be hosted by Ayatse

Osinbajo, who was accompanied by Governor Samuel Ortom, said: “I am very impressed with what I have seen at every level with the kind of leadership that you have provided for your people.

“I think it is a good example of the kind of leadership that we will like for our country; one that is very noble, one that is able to bring people together rather than divide.

“I think that it is also backed by your strong belief in faith and I am very pleased to see that you have demonstrated all of that and I thank you very much for it.

“Being a state where agriculture is very important, and being a former Vice Chancellor of a university of Agriculture, there is a lot that this State will benefit from your experience.

“My dear brother, His Excellency, the Governor of Benue State, I have felt so many times to visit you, whether or not you invite me, but here we are, we are forced, more or less, and circumstances made it inevitable that we must come here.

“I bring you greetings from His Excellency, the President, who has been very concerned about this issue of flooding in Benue State and one of the reasons why he felt it is important that I come personally and come with the Ministers of Power, Works and Housing; Environment and, of course, the Minister of Agriculture and the DG, NEMA, is that we have to find a permanent solution to this issue of flooding in Benue State.

“If you look at the issue, it does suggests that the flooding is not just now, it is a perennial thing and it will continue to be so, and we will continue to do damage if we don’t take permanent and direct steps to address the challenge that we are faced with here in Benue State.

“So, this visit is important because I intend not just to look around because there is not much that we can see given the fact that we are just here for a couple of hours, but we will be discussing with His Excellency, the Governor and, of course, the Tor Tiv, to look carefully at what we need to do solve this problem. I think that it is a problem that has been long-standing.

“I think that whatever initiative we choose to adopt, we must ensure that funds that are meant to address issues like this are properly managed, and I think the governor has shown the commitment to do the right thing. You have a great opportunity with the kind of leadership that you have in the State to turn things around.

“But in all of these, we have to be consistent and cooperate with the state government and other authorities in the state because the problem cannot be solved overnight. We must be faithful to the solutions proposed by the authorities and with patience these issues will be addressed.”