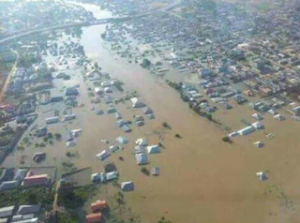 The Benue State Government has described Benue flood, which has displaced many residents and submerged close to 3,000 houses, as a disaster which is beyond human control.

The Chief Press Secretary to Governor Samuel Ortom of Benue State, Terver Akase, who made this disclosure on Channels Television Breakfast Programme, Sunrise Daily, agreed that the disaster has wreaked huge havoc on the state, noting that it was unexpected by the government.
The sad occurrence which began on Sunday, August 27, affected residents of Nyiman BIPC Housing Estate, Achusa districts and many other parts of the state capital. Akase said this is both a natural and man-made disaster and that it could have been avoided if the government were perhaps more prepared and the people less negligent.

“As a government, we feel that this shouldn’t have happened but it has happened. It is a natural disaster. Many families are without homes now; many people are displaced.

“It is both natural and man-made. Water is beyond human control; it must come whether we like it or not. It is natural disaster in the sense that, it is rain. We can’t prevent rain from coming. It is man-made because, perhaps we neglected some of the things that we should have done as a people. I am not blaming Benue people. Perhaps, the government failed to do something before now. That is why it has become emergency.

“It is man-made because drainages have been blocked and the State Government under Samuel Ortom has been telling people to dump their refuse at dump sites,” he said, adding that various environmental sensitisation has been carried out to curtail further occurrence.”

The Chief Press Secretary to Governor Ortom, who lauded the Federal Government for its swift intervention added that more ecological funds were needed by the State Government for long-term plan to manage flood disaster in the state.

“It is a situation that calls for all hands on deck and we are happy that the President is doing much to give succor to the people of Benue. The president’s intervention is timely.

“Governor Ortom has set up a committee, headed by the deputy governor to see that relief is provided to Benue State people and as a long term plan, we are requesting that the Federal Government includes Benue on its list of states that will benefit from the ecological funds.”