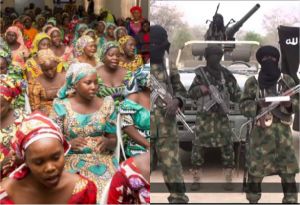 A top commander of the Boko Haram sect who played a major role in the abduction of over 200 schoolgirls at the Government Secondary School, Chibok on April 14, 2014 Auwal Ismaeela, has surrendered to the military in Borno State.

Auwal is among over 100 members of the sect who have surrendered recently to the military.

An Abuja-based public relations outfit to the military and security agencies, the PR Nigeria, stated in a report on Sunday that the Boko Haram commander now undergoing interrogation also confessed to have participated in the killings of youths in Madagali, Adamawa State and other parts of the North-East.

He was said to have denounced the atrocious acts he committed against humanity while speaking at a special military programme for surrendered and repentant members of the deadly group.

Ismaeela was said to have confessed that he and one Abu Hafsat led the Boko Haram commanders to carry out the abduction of the Chibok girls.

He was also said to have confessed to the killing of some students of the Central Secondary School in Sabon Garin, Madagali in 2014.

He said that he regretted his actions which, he said, were against Islamic junctions and urged his colleagues to give up the fight and surrender to the military authorities.

It was stated that Ismaeela was helping the security agencies with useful information on the location of commanders of the sect.

He said that he lost his right leg in an attack at Konduga, Borno State but continued with the Boko Haram because he was brainwashed.

“Abu Hafsat, a Boko Haram commander, and I led other fighters to abduct the Chibok girls. We led the operations to invade Gwoza, Bama, Limankara Mobile Barracks, Bita, Bosso, Madagali, Chibok, Pulka, Firgi, and Mubi.
“In Madagali which was my home town, Adam Vitiri, Abu Adam and Habu Kudama, some high ranking Boko Haram commanders and I led an operation in 2014 where we killed some students and youths at the Central Secondary School in Sabon Garin, Madagali.
“In one of the operations, I abducted my wife named Maryam who had two kids for me in Sambisa Forest.
“It is unfortunate that I was brainwashed and misled not only on some abductions but in the killings of my own people that were innocent. I wholeheartedly regret my actions.
“During a battle in Konduga, Boko Haram commanders and I led the operations; I lost my right leg and almost got burnt. Even at that, I did not stop fighting for the cause. Sheikh Shekau ordered that I should be given a tricycle which I continued to use for various operations before I eventually surrendered,” he was quoted as having said.

Ismaeela said that he had to surrender to the military because he was tired of the senseless killings with the members and stealing and acts opposed to the teachings of Islam.

Auwal recalled that women were being raped in public, children starved to death and many dying daily.

He added, “I will continue to cooperate with the security agencies in providing useful information on our mode of operations and to disclose top-secret hideouts of our commanders.”
Meanwhile, two factions of the Boko Haram insurgency group may be ready for talks with the Federal Government, Abdulkadir Abubakar, a former commander of the group, has claimed.

Abubakar, also known as Abu Muhammad, was the chief intelligence officer of the Boko Haram group and one of its top commanders, until his arrest in June by the military in Buni Yadi in Gujba Local Government Area of Yobe State.

Abubakar told the News Agency of Nigeria at his cell in Maiduguri that Albarnawi and Mamman Nur factions of Boko Haram were willing to negotiate and cooperate with the government to defeat the most visible leader of the group, Abubakar Shekau.

According to him, Shekau, whose capture, dead or alive, the military high command has ordered, has been the major obstacle to peace, since the insurgency began in 2009.

“Shekau is not willing to surrender due to his highhandedness. Unfortunately, the government and military authorities accorded priority to dealing with Shekau, who is blood-thirsty.
“Albarnawi has indicated interest to negotiate with the government to end insurgency and provide a lasting solution to the crisis. Albarnawi discusses this with members of his circle. And I can assure the government that he would cooperate to achieve peace.
“The two factions are willing to cooperate with the Nigerian Government to defeat Shekau,” he said.
Abubakar’s claim about the readiness of the factions to negotiate with the Nigerian authorities could not be verified as he had been incarcerated since June. But he insisted that the groups were predisposed to a peaceful resolution of the eight-year-old crisis.

Abubakar claimed to have undertaken various espionage missions and provided intelligence to the insurgents, which enabled them to hit a long list of targets, among which were the abduction of 275 students at the Government Girls Secondary School, Chibok and the massacre of students at the Federal Government College, Buni Yadi. Over 20 students were murdered at Buni Yadi.

He also claimed to have been involved in other attacks on schools in Maiduguri, Damaturu, Postikum and Mamudo. (PUNCH)