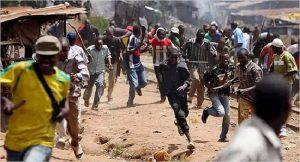 No fewer that eight persons, including one Major General Lawrence Ugbo have been killed and several others injured in Ugboju district, Otukpo LGA of Benue State.

A resident told this reporter that war broke out in the community after some boys from Ugboju allegedly attacked a group of persons loyal to a former chairman of Otukpo.

It was gathered that the ex-LG boss was in the village with his loyalists when another group believed to be his rival launched an attack on them, injuring many persons.

In reprisal, the politician went back and teamed up with his boys who stormed the community, killing anybody on sight.

They reportedly killed a retired Major General Lawrence Ugbo and cremated his corpse.

When DAILY POST reached out to the Benue State Police PRO, he said he was in a meeting and promised to get back shortly.

When contacted, however, the chairman of Otukpo LG, Hon. George Alli confirmed that several persons lost thier lives.

He, however, faulted the claims in some quaters that the clash was political.

“Yes, I am there as we speak to take victims to the hospital. Several persons, including Maj Gen Lawrence Ugbo were killed and his body burnt to ashes. The clash has nothing to do with politics, it was a land tussle that cause the incident. I will get the whole and pass it across to you shortly,” he told DAILY POST.