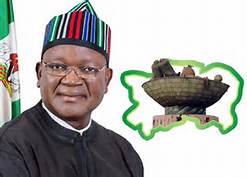 The state chapter of Nigeria Labor Congress had early this month gave an ultimatum to the state government to clear all outstanding salaries and pension allowances or face workers wrath.

The meeting was on Tuesday held at the new banquet hall of government house, Makurdi.

Speaking with newsmen after the closed door meeting, governor Ortom appealed to workers in the state not to embark on strike just as he said that he placed all the cards on the table for the labour leaders to see his challenges.

Ortom explained that since 2015, the state had been having short fall in federal allocation the situation, he said, had affected the smooth running of government.

He said that despite the lean resources, his administration still keep faith with the workers by ensuring that workers are paid once in two months.

The governor promised that his government would harness other avenues to raise money to settle all the arrears of salaries and pension allowances.

“Since we came into office, we have been having short fall in monthly federal allocation it was as a result of this that we declared state of emergency on salary payment, we are making moves to get funds to settle the salary arrears.”

“Part of the efforts is the ongoing modified table payment been headed by the deputy governor and we are sure at the end of the screening exercise we will get it right, but mind you that we have been able to save over N500million from the monthly wage bill through previous exercise”.