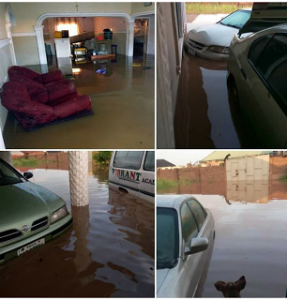 The State Commissioners for Land, Survey and Solid Minerals, Bernard Unenge, and Water Resources and Environment, Joseph Utsev, went round the town for situation report on Sunday.

Mr. Ustev explained that the ministry needed adequate funds to mitigate the situation, adding that the disaster was caused by blocked drainages in some areas.

He said that the Transmission House of Radio Benue and Wurukum Market were submerged as a result of the downpour.

He urged the federal government to include Benue among the states to benefit from the N1.6 billion ecological intervention funds for states affected by flood disasters.

The commissioner said that the state has not received any ecological assistance from the federal government since 2013.

“Benue Government is looking for ways in which River Benue can be dredged. This is because by dredging the river, majority of the water can be accommodated to prevent future overflow.