While we hear of people having a last wish as regards what they want or how they would love to be buried after they die, there are quite a few that are considered weird and somewhat bizarre.

Well, brace up as you’re about to read about a last wish that will leave your jaws hanging. A man from Benue state has become the talk of many people on social media after pictures from his burial ceremony surfaced online.

While many people would expect to see a casket or the body wrapped in white clothes as is the case with some religions, this elderly man identified as Ajingir Tsa, was pictured being buried on a mattress, covered in bedsprea.

According to a Facebook user identified as Aoraan Festus, this was the man’s dying wish: to be buried with a mattress and not in a casket. The event took place in Konshisha local government area of Benue state. 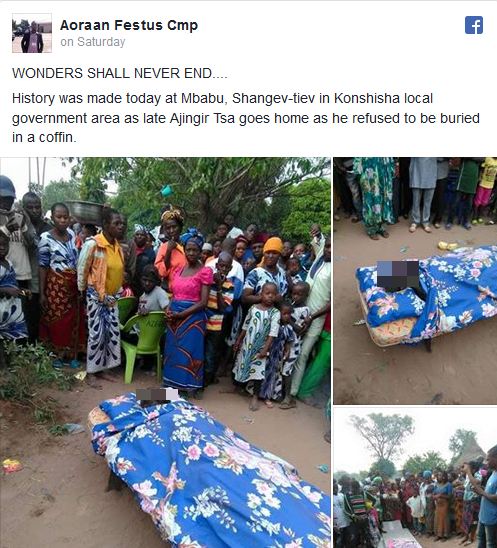 The post immediately went viral, causing major reactions on social media. While some people weren’t so surprised about it and considered it quite economical, others felt it had something to do with fetish beliefs.