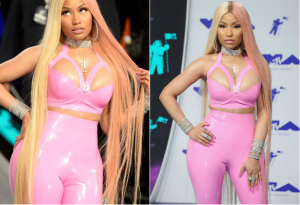 The rapper took to the red carpet at Sunday night’s bash in an eye-watering skin-tight, bubble gum pink latex outfit.

Making sure she hogged the spotlight, Nicki posed up a storm for snappers in the clinging look.

However, she was very nearly upstaged by the minor fashion faux pas.

The star teamed the super-tight look with a pair of fierce heels and a long blonde and pink wig.

She also went all out with the accessories – rocking a chunky sparkling choker, a cross necklace and loads of bangles on both wrists. 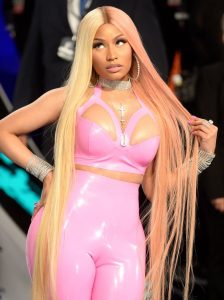 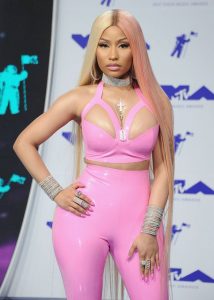 Heidi Klum was another star who was leaving little to the imagination on the night.

The German supermodel, 44, made sure she had all eyes on her in a barely-there gold halterneck dress.

Despite coming dangerously close to spilling out of the lace frock, the America’s Got Talent judge was all smiles as she posed for pictures at The Forum in Los Angeles alongside her fellow stars.

As well as showing off an enormous amount of cleavage, the long, sheer design also highlighted her toned midriff and never ending legs. 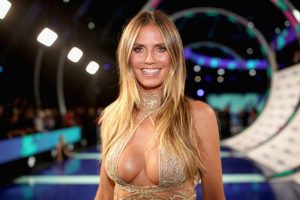 Meanwhile, Kendrick Lamar, who kicked off the show with his songs DNA and Humble, won video of the year, with Ed Sheeran taking home artist of the year.