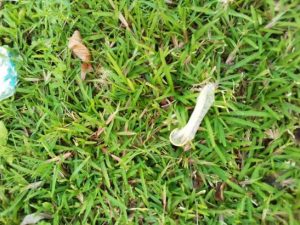 The recent flood disaster in Benue State has paved way for sex-crazed persons to have fun at the Internally Displaced Persons (IDPs) set up to cater for victims.

According to Daily Post, the romp has become rampant in the IDP camp within the last one week.

It was discovered that despite the conducive environment, some people are engaging in sexual intercourse right in the camp.

Packs of used condoms and a blood-stained pant were seen. 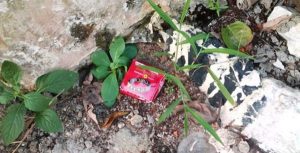 One of the IDPs, who spoke on the condition of anonymity, alleged that some individuals troop into the camp at night in the name of bringing relief materials to the flood victims but end up ‘bedding’ some of the homeless female victims.

He said aside the visitors, men and women within the camp also engage in sexual escapade.

A mother of three, who gave her name as Rose told this reporter that a particular man she identified as Famous always come to the camp at night and go out with some of the girls.

“This is what we have been facing here within the last one week. They have turned the camp to a sex haven.
“In fact, there is this particular man who calls himself Famous, each time he comes here, he stays till late night.
“Sometimes, he ends up going out with some of the girls, whom he claims are his relatives”, she said.
Asked if she had reported to the emergency officials, Mrs. Rose said,

“It is not my business to do that. If the girls agree with him, who am I to stop them?”
An official of the Benue State Emergency Management Agency, who said they have no right to stop any legally married couple from making love. 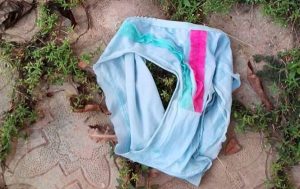 “It is not part of our duty to stop anyone from having sex. We have not heard of any rape case so far, so I can’t speak on people having sex.
“Don’t forget we have married people in this camp. We can only advise them to avoid it for the meantime,” the official who declined to be named said.
When informed that some packs on condoms and blood-stained pant were seen in the camp, she angrily replied thus:

“nobody has complained to us about this. I am just hearing this for the first time.”
“If you see condoms and blood-stained pant, then I have no idea of how they got in here. Excuse, I am busy now.”
When contacted, the Benue State Police PRO, Mosesw Yamu, said he is not aware of the development.

“Was anybody raped? I was in the camp today and I didn’t see such. Such things are better seen and not heard.
“These are pictures and subject to verification, besides, nobody reported any case of rape or any form of sexual abuse in the camp,” he said.