SO SAD! ‘I Was Burnt Completely And Left To Die’ – Burn Survivor Desire Benjamin Shares Her Emotional Story…

Sometime last year, then 21-year-old aspiring model, Desire Benjamin Chinenye defied all odds to live and heal after an indoor gas explosion left her burnt completely and almost to the point of death.

“She woke up at about 6am to boil water to bathe for work, she turned on the gas and struck the matches, it didn’t catch, then she did it again, it was then we heard the explosion.

The fire threw her against the door, and then blocked her exit, according to her, she didn’t know the force dat got her too her feet, and so she entered the fire and rushed out of the kitchen to the room, the fire chased her out, the rug where she was standing on got burnt.”

‘Her family members who had been asleep when the explosion happened jumped out of bed and amidst the chaos, did the first logical thing that came to mind: grabbed a few buckets of water from the bathroom and threw on her. They succeeded in quenching the fire, but by this time, she was so badly burnt and had passed out. ‘

The first hospital they took her to refused to offer any treatment at all. Not because they didn’t want to but because they simply felt there was no point. She was as good as gone- a smouldering remainder of the bubbly girl that Desire had been. 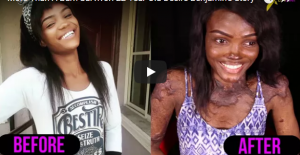 The first hospital they took her to refused to offer any treatment at all. Not because they didn’t want to but because they simply felt there was no point. She was as good as gone- a smouldering remainder of the bubbly girl that Desire had been.

Fast forward to yesterday 20th of September, A new Chinenye, who has now healed and learned how to embrace her scars, shared her story with the 234Stars on what really happened, how she survived and how this incident brought out a new her.

‘I had a friend in the hospital that we used to pray together. One night, her line went flat (ie the electrocardiogram which monitored her heart beat pinged off, signifying that she had stopped breathing).’ Another pointer that the very next second wasn’t guaranteed- she too could simply stop breathing at anytime.But she didn’t.

She endured the pain, sometimes bursting into maniacal laughter from excessive pain that her brain could not properly process. Eventually, by some sort of miracle, the burns healed enough for her to start learning how to walk again before being certified fit to leave the hospital.

It was after I was discharged that the true reality of what happened to me fully dawned on me. Having strangers walk up to me at the mall and tell me to cover up because my scars were “unsightly”, and not being able to go back to work because I felt people will concentrate on My scars more than they would the product I was trying to sell was a constant occurrence and I found herself having to stay indoors for long hours- my slowly healing skin was in danger of itching and getting infected if I was ever in a humid environment anyway.

“That can’t be me,” “I can’t sit in the house because people are not comfortable with how I am. The scars on my body are a sign of victory. I overcame what tried to consume me and I should be proud of it.”

“Some people have scars even if not physically, they have emotional scars. If I’m able to reach out to them, encourage them and try to help them gain back their confidence in anyway that I can, I believe that would be fine.”

Chinenye turns 23 in a couple of weeks! The new her might really be what would help another survivor scale through, if not her scars at least her story! 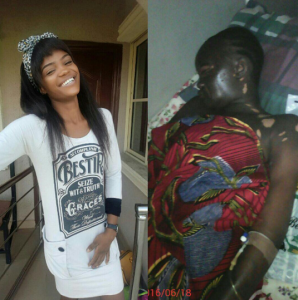